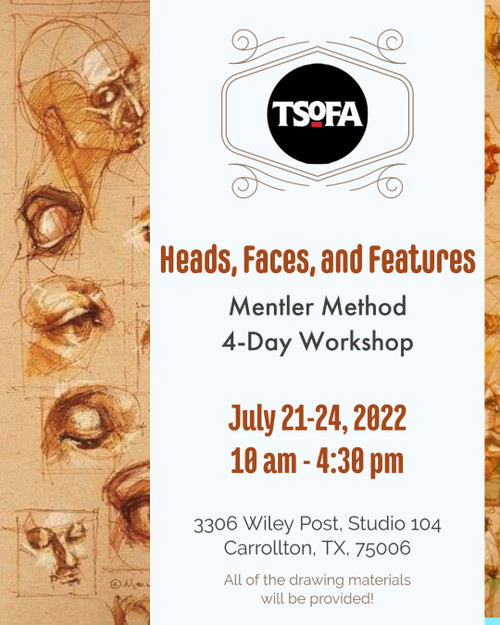 Structure & Mechanics of the Human Head

The world’s great Masters all had one thing in common they combined what they saw with what they knew. They learned first from studying the Masters that came before them, secondly they observed the nature of things and acquired a useful knowledge base, thirdly they observed the particulars of the things themselves. They took nothing at face value without judging it based on what was known.

One cannot successfully draw, paint, or sculpt the human head without thoroughly investigating the bony structure of the Skull. Then, further study of the Muscles of Mastication and Expression is required before Mastery can begin. Some mistakenly believe that working from observation reveals what lies beneath the surface. On the contrary, no master draughtsman has ever worked purely from observation. What one draws is directly related to what one knows; drawing is an intellectual business that incorporates the brain. The Master draughtsman views the world through their mind not their eyes.

The Mentler Method employs the Laws of Architecture, Mechanics, and Motion. The Skull is the structure that dictates outward appearances (Architecture), the muscles of mastication modify that appearance (Mechanics), and the muscles of expression give the face character (Dynamics). This Werkstatt places Function and Form ahead of Latin names. It constructs from the inside-out; gone are the envelopes and contours employed by the observation-oriented model-dependent practitioners.

“You Can’t Paint A House Until It is Built.” – George Brandt Bridgman –

Your instructor is the world’s foremost expert on George Brandt Bridgman and Robert Beverly Hale and has spent the requisite time with all the usual suspects. He has shamelessly taken the best concepts from the best resources and combined them with his own.

These workshops are about learning how to learn and creating a pathway toward Mastery.

This Mentler Methode Workshop is part of Michael’s core drawing and painting curriculum.

GESTURE – The Art Of The Start*

PLAN – The Blueprint For The Human Form*

GRAVITY – The Maxims Of Life Drawing

MUSCLE & BONE – The Mechanics Of The Human Machine

As a master painter, sculptor, draughtsman, designer, photographer and author Michael Mentler’s creative journey has covered a polymathic array of artistic endeavors. Born in the small mid-western town of Jacksonville, Illinois Michael’s visual sensibilities were observed and nurtured at an early age. Later, he was mentored by Howard Sidman, which led to his first solo show at the age of fourteen. Michael continued his formal education at Layton School of Art in Milwaukee and Washington University in Saint Louis, where he became a protégé of Barry Schactman and Werner Drewes.

Along with winning over a hundred awards, including ‘Best of Show’ and ‘Gold Medals’ from some of the most distinguished juried venues, Michael’s works are included in many private collections, including the Pulitzer, the Mead Library, and the Dallas Museum of Art.

He is Founder and Director of The Society of Figurative Arts, where he mentors select Apprentices. His work has appeared in publications such as; American Artist, American Artist Drawing, American Artist Workshop, Graphis, Communication Arts, and numerous others.

The Book of Bones, which he authored, is in art school libraries throughout the world.

“Michael’s sketchbooks are masterpieces, he is a modern-day Leonardo.” – Richard Schmid –

“Michael’s intense study of the teachings and works of Bridgman and Robert Beverly Hale make him a natural progression of that linage with the added twist of his own dynamic personal style.” – David Kassan –

The Book of Bones by Michael Mentler, Hardcover – Abridged, 2016